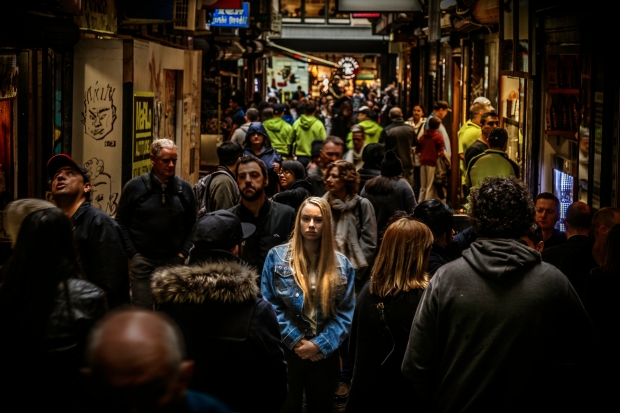 On Sunday, I was lucky enough to see actor Geena Davis speak at this year’s All About Women event here in Sydney. Davis spoke about her experience in Hollywood and the underrepresentation of women in film and television. Her address was funny, informative, and eye-opening. But it wasn’t statistics about the lack of gender parity on screen that struck me the most. (If you’re interested in the topic, please visit the Geena Davis Institute on Gender in Media‘s website. It’s well worth a read, and I may address the topic in a future post.)

As a child, Davis’ greatest wish was to “take up less space in the world.” This desire was born from being very tall and towering over both her male and female classmates. But Davis acknowledged that this isn’t just a tall girl problem. In fact, as soon as she voiced her childhood desire to be smaller, I immediately thought, “Me, too!” And I’m only five feet tall.

Women are conditioned from a young age to take up as little space as possible, to be quite and not speak up, to fade into the background. Even the smallest, quietest of girls internalize these norms and think their meek presence  may be too much. I spent most of my childhood and adolescence quashing my feelings and opinions at school. I got the message: The world expects you to be quiet and well behaved at all times. Don’t make waves. What you think is not worth sharing.

But home was my safe space, where I could yell and take up space and make a mess and cry loudly. My well-meaning parents unknowingly reinforced my anxieties by telling me it was fine to act this way at home, so long as I didn’t do so in public. They meant to quell any negative traits (talking back, bullying, being disruptive at inappropriate times), but kids don’t really understand nuance. I took their words to mean that I should always be quiet, never voice my opinion, and do all I could avoid attention in public.

If my parents had acted differently, would I have been more vocal and outgoing at school? Maybe, but likely not. I was a painfully shy child and probably had undiagnosed social anxiety issues. But the real issue is that the world is not a safe space for girls and women to be their selves. We can carve out places where we feel comfortable enough to stand up and speak out, if we’re lucky, but the world as a whole is still unwelcoming and unsupportive. The lessons start when we’re young and get reinforced as we age: Men act one way, women are expected to act another. This thinking is never going to stop if we continue to raise boys and girls with different sets of rules.

So please don’t praise little girls for their quietness or be quick to label the outspoken ones bossy. Encourage them to take the lead and speak their minds. See in them the same positive traits you see in boys (and vice versa!). And always let them take up as much space as they need.